Seinfeld 2.0 Would be Different 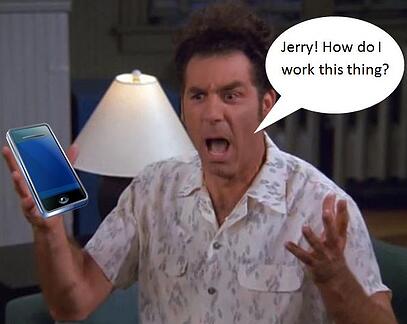 I am certainly of the generation who grew up watching Seinfeld, Friends and a host of other shows like that. Seinfeld is a very unique show because it is still funny and clever  years later.

It occurred to me, however, while watching one Seinfeld episode in particular, that if they shot new episodes today, they would need to be updated in one key area.  Nobody had cell phones.

Now, at first this doesn’t sound any more disastrous than the fashions on some of our favorite stars from the 80’s and 90’s, but if you dig a little deeper, it is a show-ending flaw.

This could have all been solved with about three phone calls, or with one group text exchange.  And let’s not even start with true smart phone solutions like Fandango, Google Maps, Foursquare, etc.

If it came back today, Seinfeld would be a different show.  How about you?  Is your strategy for connecting with your audience different than it was in 1990?  You might say it is in some tactical ways, but is it really?  Have you really re-thought what is possible?  Have you really taken on the responsibility to connect as you now are able?  Have you re-evaluated marketing plans you developed in 1990 that were not scalable and realized you could accomplish them today?

You must realize how fundamental a change the connected consumer really is to your business.

And like George Costanza….  (slap hands together)…. I’m out.